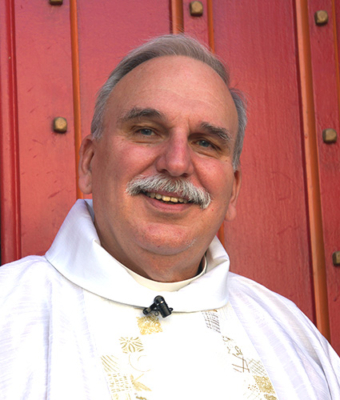 The Rev. Jeff Goldone joined Christ Church Cathedral as a member in 2012 and was received into the Episcopal faith at the Easter Vigil of 2014. Jeff believes he had a call to priestly ordination at the young age of eight, but did not pursue the call as a teenager or young adult due to the teachings on homosexuality of the Roman Catholic Church.

Soon after Jeff became acclimated in the Episcopal faith, he began study toward priestly ordination with the established Diocesan Episcopal School of Ministry in St. Louis. Jeff completed the three-year course of study in 2018, and completed additional Anglican Study courses at Eden Seminary in St. Louis. Jeff completed a six-month internship at Trinity Episcopal Church in St. Louis’ Central West End, and a one-year internship at Christ Church Cathedral.  Jeff was ordained a transitional deacon on June 19, 2021 and was assigned to St. Timothy’s Episcopal Church in Creve Coeur. Jeff was ordained a priest for the Diocese of Missouri on Dec. 19, 2021.

Jeff ‘s ministry is focused on chaplaincy and pastoral care, where he works in the Pastoral Care Departments with the SSM Health Care System at St. Louis University Hospital and Cardinal Glennon Children’s Hospital. In addition, Jeff provides weekend supply coverage to congregations in the diocese.

Jeff holds a BA in Foods and Nutrition from Dominican University in River Forest, IL. He has held various upper management positions in senior living dining services throughout his entire adult life; president of his own dining services consulting company; and an adjunct professor at Fontbonne University.  Jeff was raised in Streator, IL and has one brother who lives in Denver.  Jeff enjoys cooking, gardening, and spoiling his yellow Labrador, Clare.