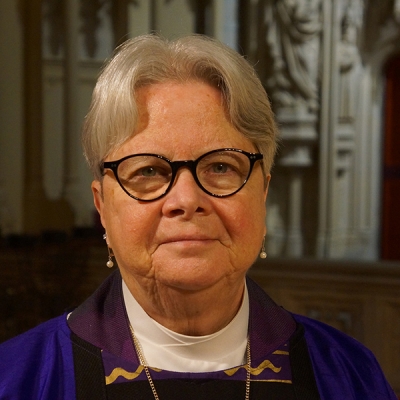 The Very Rev. Kathleen “Kathie” Adams-Shepherd is the 15th ordained clergy leader in the Cathedral’s 200-year history. She arrived in January 2017 from Trinity Episcopal Church, Newtown, Conn., where she had served as rector for 20 years.

The Cathedral’s call to her reflected its long-standing commitment to rich liturgy, social justice in downtown St. Louis and beyond, and mutual ministry with the congregation. She wrote that she accepted with “a full and humble heart” and “great joy and excitement.”

She describes her style as collaborative, mutual, open, broad, creative and inclusive. She believes that “strong faith-filled liturgy should transform us by God’s grace into a people in love with God and one another: healed, uplifted, renewed, restored, sent forth with gifts to proclaim the source of our light, life and hope to a world in dire need.”

“Dean Kathie,” as the congregation knows her, earned a bachelor’s degree in education/psychology at Bridgewater State College, in Bridgewater, Mass. In 1977, four years after the Episcopal Church began ordaining women, she acquired her Master of   Divinity degree from Union Theological Seminary, New York.

She initially served as curate at Church of the Resurrection in Oswego, N.Y., and, after two years, was named its priest in charge. Three years later, she was called to be rector of two parishes in upstate New York: St. John’s Church in Cape Vincent and Christ Church in Clayton.

She is married to Richard “Shep” Adams-Shepherd, a psychological therapist. They have two adult children.